On January 16-20, an international exchange event by students at the Lincoln House Masan School was held in five major cities in Japan. The ceremony started in Saitama and continued to Tokyo and Osaka, and will further continue in February to Hiroshima and Fukuoka, where the Homecoming Festival will be held, at high schools, civic centers, and senior citizen centers.

On Tuesday, January 16, the first day of the ceremony was held at Seibu Bunri High School located in Saitama. 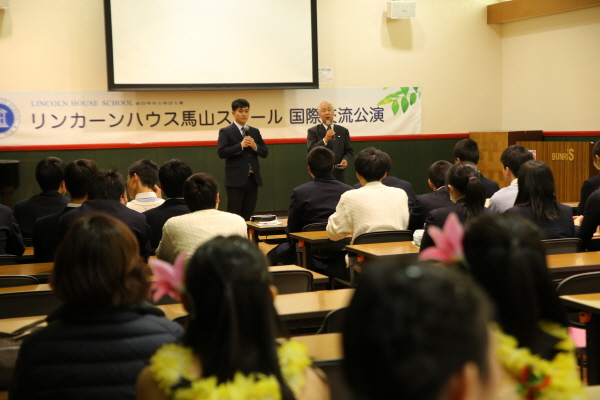 More than 100 Japanese students gathered in the small hall where the performance started. At first, they seemed unfamiliar with the atmosphere, but as they watched the colorful and enthusiastic performances of the Lincoln students, they began to enjoy the show with a bright smile.

The students also opened their minds and listened to the mind lectures. Good News Masan Church Pastor Kim Sung-hoon spoke about mindsets that changed the world.

“When I try to make an egg stand, it can’t stay standing. But if I crack it, then I can make it stand. In the same manner, we must break our thoughts.”

After the lecture, the Japanese and Lincoln students were divided into groups and had time for exchange. Although their language and culture are different, they got closer to each other by asking questions, talking, and taking photos during the short time.

On the second day, January 17, at 7:30 pm, an event was held at Okubo Hall in Shinjuku district, Tokyo.

Good News Pastor Kim Sung-hoon spoke about the Reformation of Martin Luther through Jan Hus’ Inquisition. In the end, all history of mankind is made up of the Scriptures, and the greatest thing that human beings can do is to believe in Jesus who took all of our sins.

Despite the cold weather and the rain on that day, newly invited people came to the venue, and they were happy to see the performance and listen to the lecture.

On the next day, January 18, a performance took place at the Good News Osaka Church. Starting with the Righteous Stars’ dance from 7:30 pm, cultural dances of various countries were performed, and there was also an a cappella performance by Korean college students from Masan.

Especially, during the acappella, the audience listened to the many voices merged into one beautiful harmony and gave a big applause.

Lecturer Kim Sung-hoon talked about the performances of the Masan Lincoln School students at the high school in Saitama that inspired the Japanese students and expressed the desire to continue such performances and exchange.

Also, there were a lot of saints who had not been coming to Osaka Church for a long time who attended this time. The participants were happy and appreciated the dances and cheerful smiles of the students.

On the next day, Friday 19th, cultural performances and mind lectures were held for approximately one hour from 13:20 at the Hiroshima prefectural Akihuchu high school.

Good News Masan Church Pastor Kim Sung-hoon spoke about how to earn a person; a businessman must earn a client’s heart and a politician needs to gain the citizens’ hearts. Likewise, we must learn to value the hearts of people.

“I cannot believe they are the high school student as I. The performances are so beautiful and I envy the Korean students who are carrying out activities internationally.” (First grade female student in International Studies)

“The performance was wonderful, of course, but I learned once more about the importance of the heart and earning a person through the lecture by the principal (Rev. Kim Sung-hoon)” (Yasuko Tokunaga, Head Teacher of International Studies)

The last city to tour was Fukuoka. In the afternoon of the 20th, there was international exchange and cultural performances with Masan Lincoln School students and short-term missionaries at Isoudakan, an elderly home in Fukuoka City. Approximately 60 people including about 40 elderly people and about 10 members of the workers participated in the event.

Good news Tongyeong Church Pastor Won-hee Lee gave a lecture on “Where does happiness come from?” Although both sons grew up under the same father, one of them became the worst criminal in the city whilst another studies hard to become the most competent judge in the city. He conveyed a message of hope to the participants, regardless of age, saying that happiness is not determined by our circumstances but what kind of mind you have.

“It was a wonderful performance beyond expectation, and we were so happy watching the smiles of our elderly. Please come again. “(Isoudakan staff)

At 3 pm on the same day, a cultural exchange events in the home of the elderly in Donggwangsa. There were about 30 elderly people and officials. Dance performances by students at Masan Lincoln School and a cappella performance by Good News Masan Church students were presented.

Masan Church Pastor and Lecturer Kim Sung-hoon delivered a message to the elderly people saying that people cannot live alone and must live by working together because nothing can be achieved alone, sharing the mind to them. It was a short moment, but it gave pleasure to the minds of the elderly.

Through this event, mind lectures were held in high schools for the first time in Japan and captivate the minds of students and other staff members. The will of God wanting to spread the gospel could be seen through the turning of events while preparing. There is hope that this event will lead to a gospel being spread through the mind lectures to the Japanese in the future.